The best and worst of the 2019 Super Bowl ads

A year ago, the Philadelphia Eagles shocked the New England Patriots to win the Super Bowl for the first time in their history. An estimated 103.4 million Americans tuned in for the NFL’s flagship event; easily the biggest TV audience of the year.

With one in three Americans likely to be tuning into the Super Bowl this weekend, it’s perhaps no surprise that competition for advertising slots during the broadcast is fierce. Sam looks at the crazy money that companies are paying to get involved this year…

Sunday night sees the LA Rams take on the New England Patriots for the 53rd Super Bowl. While the outcome of the game is clearly important, in recent years the Super Bowl has become more than just a sporting event.

Maroon 5 are the latest high-profile artist to perform the half-time show, while the TV ads to be screened during the event generate nearly as many column inches as the football itself. Since the first ad went out in 1967, the battle for viewers’ attention has been fierce.

According to Kantar Media, the cost of advertising during the showpiece event has rocketed by 87% in the last decade. It now costs in the region of $5.05 million for a 30-second commercial, up from $2.7 million in 2010. 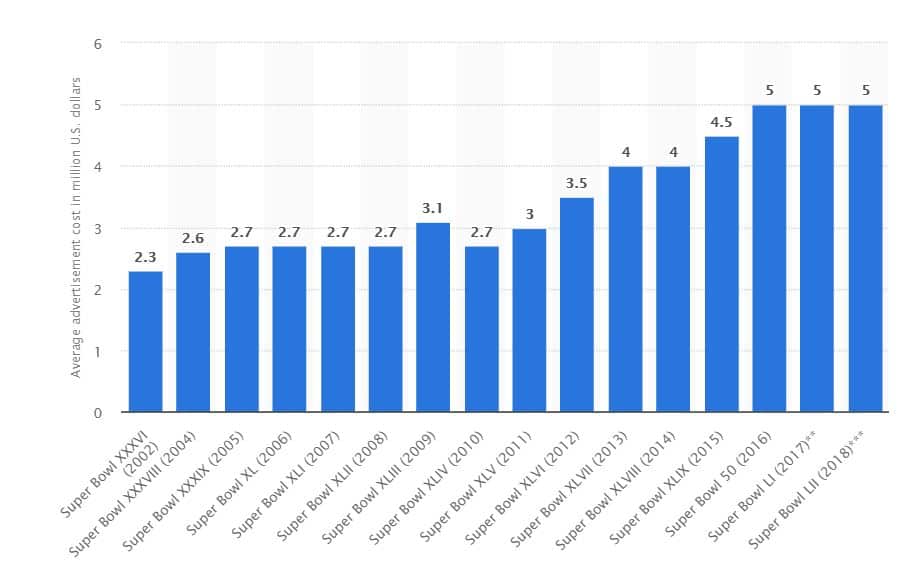 High-profile celebrities are once again a big part of this year’s ‘event ads’. So, what can US viewers expect to see this Sunday? We cast our eye over some of this year’s Super Bowl ads.

Did you know that Pepsi have a brand of sparking water called Bubly? No, us neither.

In a move which suggests that the entire brand name had been dreamed up simply for the purpose of creating this commercial, Canadian singer Michael Bublé (see what they did, there?) is seen sitting on a supermarket floor ‘correcting’ the brand’s spelling on assorted cans of pop.

If there’s a better Super Bowl ad this year, we just haven’t met it yet.

Once you pop, you can’t stop

Pringles’ successful ‘flavour stack’ campaign returns this year, showing how various flavours of the snack can be stacked to make (apparently), 318,000 different combinations.

The star of this year’s commercial is a sad voice assistant who bemoans the fact that she will never enjoy the great taste of a Pringles product. She is good at playing 70s disco hits, though.

Once you (drink) pop, you can’t stop

In one of the more unlikely celeb mash-ups of the year, Oscar-nominated actor Steve Carell sings the praises of Pepsi alongside rappers Lil Jon and Cardi B.

When a customer orders a Coke in a diner, the waiter asks: ‘if Pepsi is OK’. The Foxhunter and Welcome to Marwen star then intervenes to argue that, yes, Pepsi is very much OK.

As any movie fan to name Jeff Bridges’ finest movie role, and you’d get a lot of people arguing the case for Jeffrey ‘The Dude’ from The Big Lebowski. The 1998 film has developed a cult following over the years, and Bridges has reprised his role as The Dude for a Stella Artois commercial which, despite its good intentions, never quite hits the mark.

Bridges features alongside Sarah Jessica Parker, who reprises her Carrie Bradshaw character from Sex In The City. The main point of uniting the pair is that neither order their trademark cocktails at a swanky bar, preferring a Stella instead.

The ad supports the company’s commitment to providing clean water through their partnership with water.org – as Bridges says: “Well, changing can do a little good.”

Lots of people are disappointed that Bridges is trampling all over a beloved character but, as The Dude himself would say, “This aggression will not stand, man.”

If a Dalmatian being blown about by the wind is your thing, then this year’s Budweiser ad is for you.

Using Bob Dylan’s classic 1963 hit Blowin’ In The Wind, the ad sees the dog riding on a horse-drawn beer wagon before revealing that 100% of Budweiser is now brewed using renewable energy.

Being honest, the notion that the entire US Super Bowl TV audience might race to the loo at half time is not something we’d ever given much thought to. And now the idea has been raised by Febreze, we’re not sure we want to.

The brand has decided to warn viewers of the perils of smelly lavatories, suggesting that the one critical product you need for Super Bowl night is toilet freshener.

While it may be the case that you’ll need to keep your bathroom smelling floral during the big game, do we really want our attention drawn to what our fellow Super Bowl viewers may or may not be doing RIGHT NOW?